History of the U.S. Bankruptcy Court, District of Minnesota

The Bankruptcy Act provided for the appointment of bankruptcy referees and Minnesota's district judge, William Lochren, immediately appointed twelve part-time referees to sit around the state of Minnesota, covering every part of the state from Winona to Marshall; from Crookston to Duluth. The referees were assigned cases in specific counties. While these appointments provided an immediate presence of the federal court in virtually every part of the state, it turned out to be inefficient and over the years, fewer referees were appointed, and various referees' offices consolidated.

Although little is known of these early referees, one of them was nationally prominent. Herbert M. Bierce sat in Winona and served the southeast corner of Minnesota as a referee from 1918 through 1951. In 1926, Bierce was one of the founders of the National Conference of Referees in Bankruptcy and the first editor-in-chief of the Journal of the National Conference of Referees in Bankruptcy, heading that publication from 1926 through 1949. The journal that he pioneered is now called the American Bankruptcy Law Journal and is the premier law review on the subject of bankruptcy in the United States and is still published by the organization that he helped found, now known as the National Conference of Bankruptcy Judges. Nancy C. Dreher and Margaret A. Mahoney, former bankruptcy judges for the District of Minnesota, have both served as editors-in-chief of the Journal.

Over the years, the nature of the court of bankruptcy in Minnesota evolved from the use of large numbers of part-time referees in disparate locations towards full-time referees sitting in the Twin Cities. George A. Heisey was appointed in 1945, later becoming the district's first full-time referee, sitting in Minneapolis and Duluth. Referee James Giblin followed in 1948, sitting in St. Paul and assuming responsibility for most of the rest of the state. From 1950 to 1958 Heisey and Giblin were Minnesota's only referees.

By 1966, there were four full-time bankruptcy referees serving Minnesota, all stationed in the Twin Cities. George Heisey retired but continued to assist on a part-time basis. In recognition of the fact that the business of the district court, sitting in its capacity as the court of bankruptcy, had become substantial and specialized, Chief District Judge Edward Devitt designated Referee Kenneth G. Owens as the district's "executive referee" perhaps for the first time recognizing the bankruptcy referees as a distinct part of the district court.

In 1973, the Supreme Court, for the first time, promulgated bankruptcy rules. Among many changes, three major changes were made regarding the bankruptcy referees. The jurisdiction of the courts of bankruptcy was expanded; the referees were authorized to make final orders in most matters in a bankruptcy case, subject only to review by a district judge on appeal under ordinary appellate standards; and the title of the referee was changed to "bankruptcy judge."

Three years later, in 1976, based on a recommendation of the Judicial Conference of the United States, the district court in Minnesota gave all of its bankruptcy judges district-wide jurisdiction. 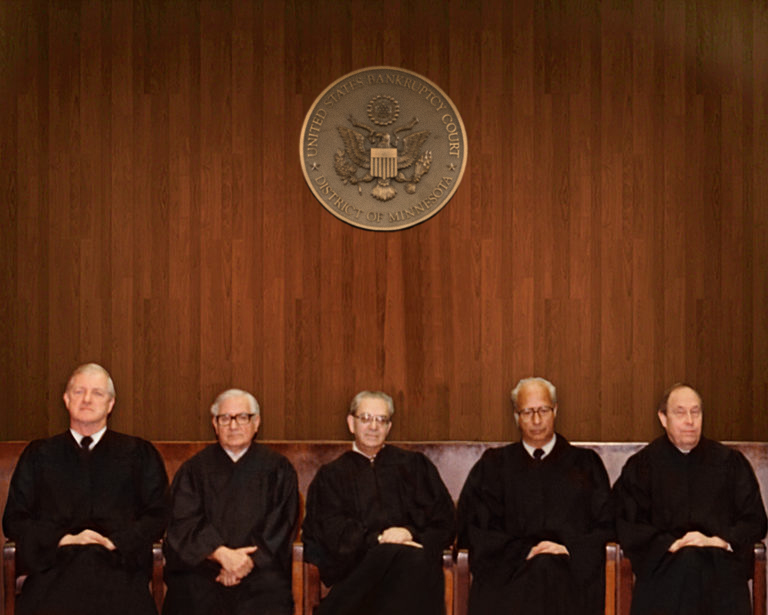 The contemplated transition never occurred. In an appeal from the United States Bankruptcy Court for this district, Chief District Judge Miles W. Lord held that the arrangement provided by the Bankruptcy Reform Act of 1978 was unconstitutional. In Marathon Pipeline Co. v. Northern Pipeline Const. Co., 12 B.R. 946 (D. Minn. 1981), Judge Lord determined that since bankruptcy judges did not have lifetime tenure and the salary guaranties of Article III of the Constitution, they could not be vested with the broad jurisdiction that the Bankruptcy Reform Act had given them. The Supreme Court agreed with Judge Lord, Northern Pipeline Const. Co. v. Marathon Pipe Line Co., 458 U.S. 50 (1982) and suddenly the new United States bankruptcy courts were left without any authority.

Finally, in the summer of 1984, Congress reacted to the Supreme Court's Marathon decision issued almost exactly two years earlier and passed the Bankruptcy Amendments and Federal Judgeship Act of 1984, P.L. 98-353, reconstituting the bankruptcy court as a "unit" of the district court and containing other provisions in an attempt to cure the constitutional problems with the Bankruptcy Reform Act of 1978. While adding some stability to the court, the 1984 Act had other unfortunate results. It resulted in the elimination of the arrangement with the bankruptcy court in North Dakota and the Sixth Division of Minnesota once again became the responsibility of Minnesota's bankruptcy judges. In response, the clerk opened a divisional office in Fergus Falls, which then became a regular place of holding court. The Act also eliminated all part-time bankruptcy judge positions in the country effective two years after its enactment. Thus, the half-time position that had existed in Duluth since 1970 was terminated in July of 1986, although the clerk continues to maintain a divisional office there.

With her appointment in 1988, succeeding Judge Mahoney who resigned to become a bankruptcy judge for the Southern District of Texas, Nancy C. Dreher became the forty-eighth in a line of men and women to serve the District of Minnesota as bankruptcy referees and bankruptcy judges and the eleventh to occupy that position on a full-time basis. 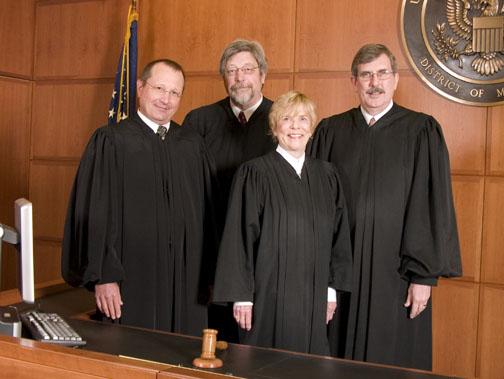 Patrick G. De Wane succeeded Timothy R. Walbridge as clerk of court in 1990 and Judge O'Brien succeeded Judge Kressel as chief judge in 1993. In due course, Judge Kishel replaced Judge O'Brien as chief judge in 2000 and Patrick G. De Wane was replaced by Lori A. Vosejpka as clerk in 2004, making her the first woman to serve as clerk of a federal court in Minnesota.

In 2007, Nancy C. Dreher succeeded Gregory F. Kishel as chief judge and became Minnesota's first female chief bankruptcy judge. She served in that position until January of 2011, when she retired. The retirement was nominal, however, since the Eighth Circuit Judicial Council immediately recalled her and she continued to work full time and she was not replaced. As a result of Judge Dreher's recall status, Gregory F. Kishel again became chief judge, becoming the first person to fill that position twice.

A new transition started in 2012, when Judge Robert J. Kressel retired. He was recalled to work part time and was replaced by Judge Kathleen Hvass Sanberg, who became Minnesota's first new bankruptcy judge in nearly a quarter of a century.

On November 23, 2012, Judge Nancy C. Dreher died, eight years after receiving a double lung transplant. In May of 2013, Michael E. Ridgway was appointed to replace Judge Dreher.  Shortly thereafter,  Judge O'Brien retired on June 30, 2013, and was replaced the next day by Katherine A. Constantine.

As this second transition was occurring, Chief Judge Kishel took to referring to Judges Kressel, O'Brien, Dreher, and himself as the "Legacy Judges."  Chief Judge Kishel was the last of the Legacy Judges in regular service.  He retired on May 31, 2016, and he was replaced the next day by Judge William J. Fisher.

On June 30, 2021, Judge Robert J. Kressel retired after serving multiple recall terms.  He was the second longest serving bankruptcy judge in the country.

On July 30, 2021, Clerk of Court Lori A. Vosejpka retired, and was replaced by Tricia Pepin.

On June 22, 2022, upon the expiration of Judge Ridgway's term as chief judge, the district court appointed Judge Constantine to succeed him as chief judge.